‹Radical Management› is a set of 5 principles. There are only two types of organizations: The ones that love and delight their customers and the others. Amazon, Apple, Salesforce are organizations that have succeded despite fierce competition due to delighted customers. 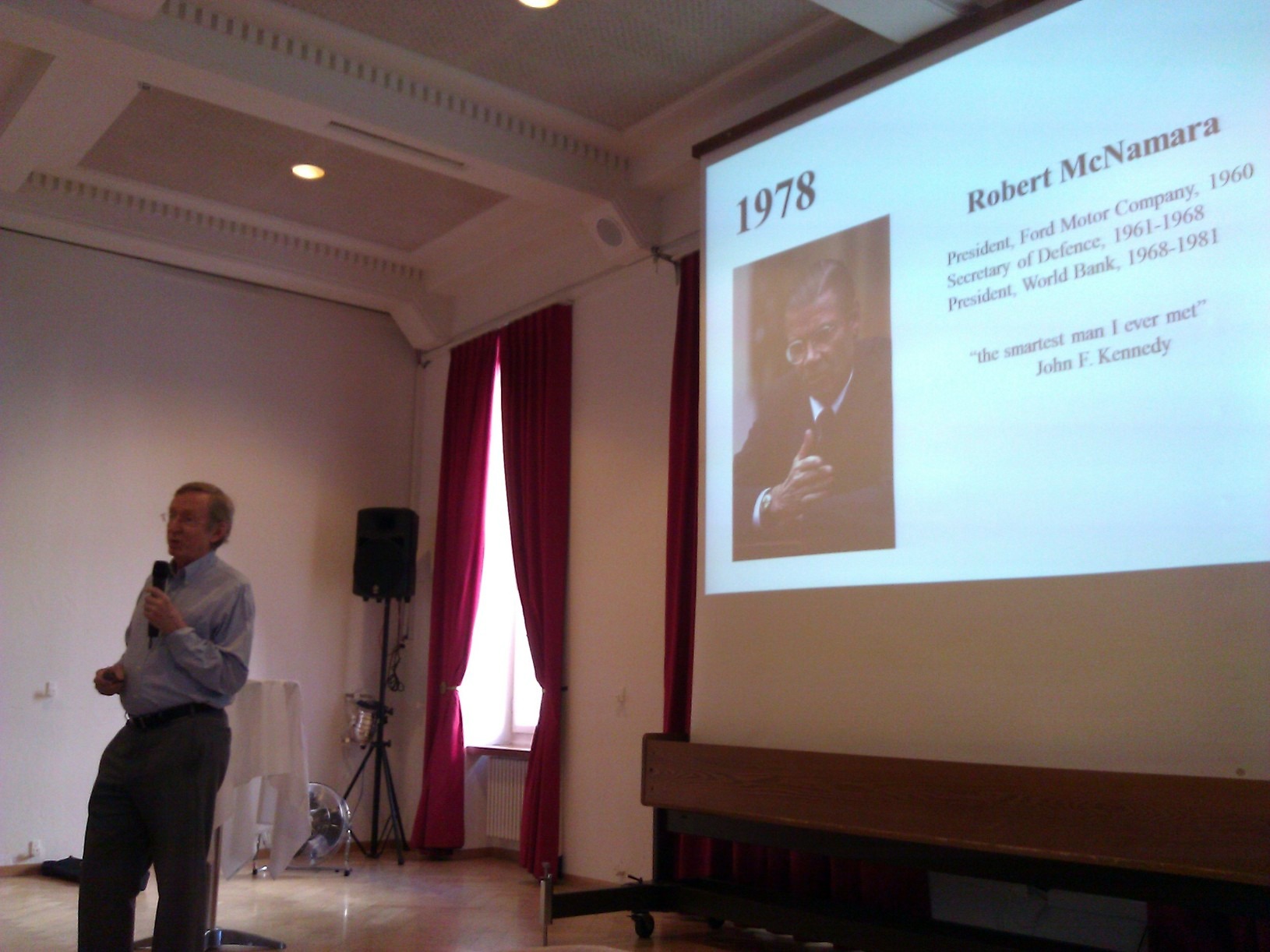 In 1978 World Bank’s Robert McNamara increased lending massively. The quality of the projects had to be pushed, too, otherwise the money would be lost and the purpose of the program would be undermined. McNamara didn’t welcome critisism that the money may be invested in bad undertakings. His management style was radically top-down.

In 2000 Steve coached Fortune 500 firms how to use the power of leadership storytelling. The programs often times didn’t stick, though, even when they were successful. Conventional management just muzzled these innovative programs.

Lean manufacturing and also even marketing sometimes suffers from top management killing. In 2008 Steve asked why this happened, which management principles lead to cut successful projects? 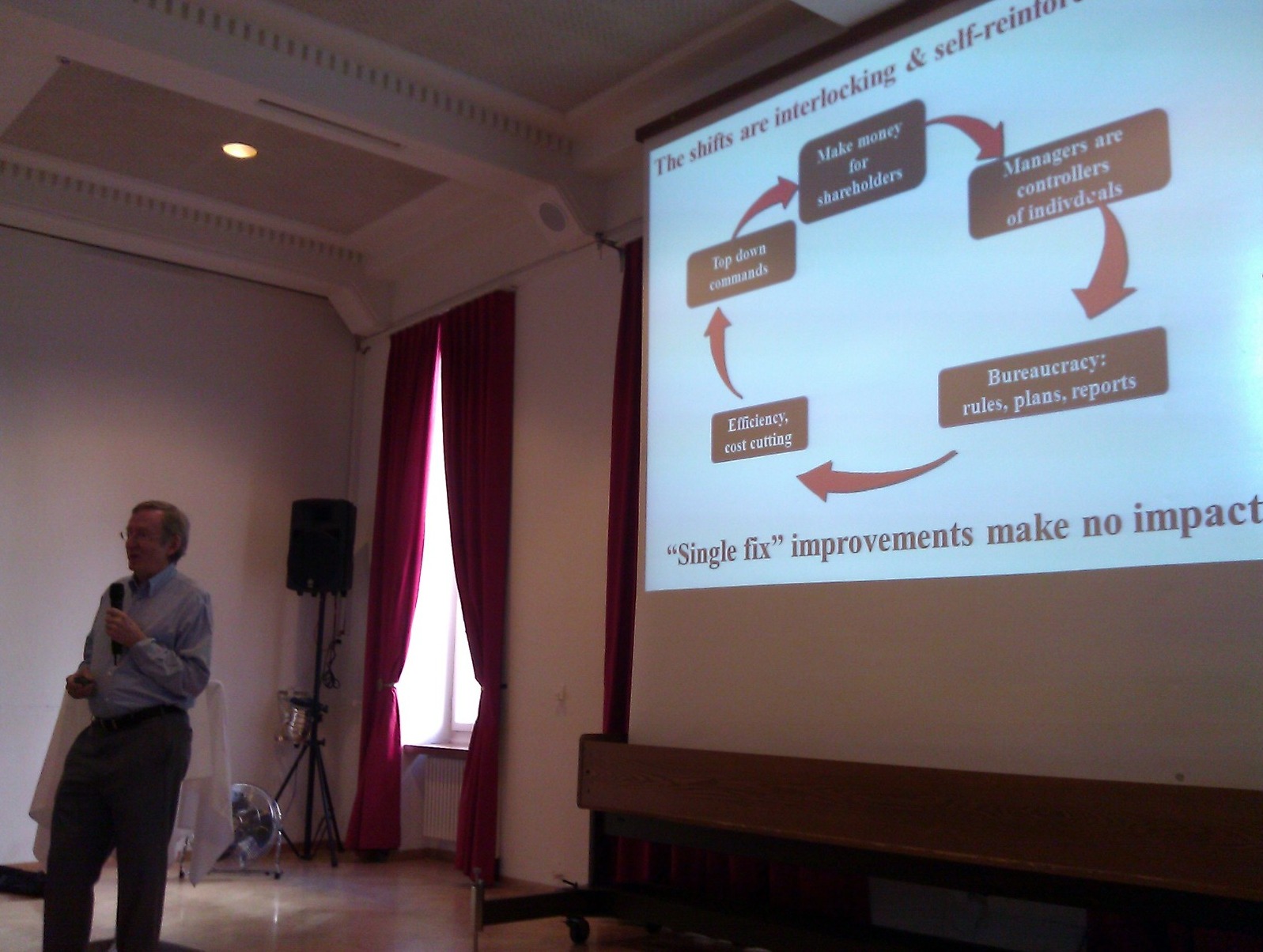 The 5 conventional management principles are:

The shifts are interlocking and self-reinforcing. Single fix improvements make no impact.

In 2009 a conclusive proof of the failure of traditional management appeared. Therefore running organizations has to be changed. Companies are dying faster than ever. The iron triangle quality, speed, budget is still valid, but it should be applied to smaller user stories that are brought to customers more quickly. 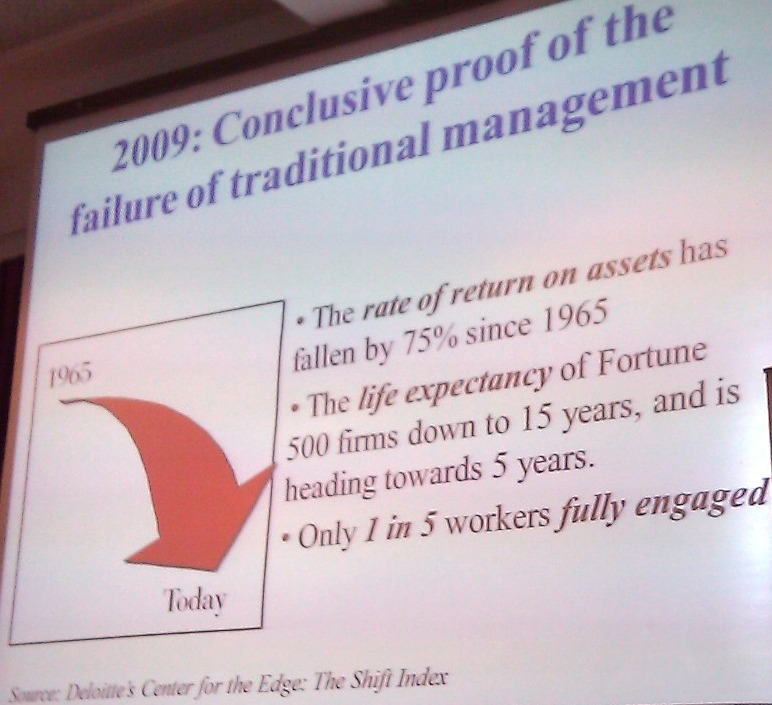 The significant problems we have today cannot be solved at the conventional level of thinking. 5 changes must happen in the organization in order to survive in a modern marketplace. 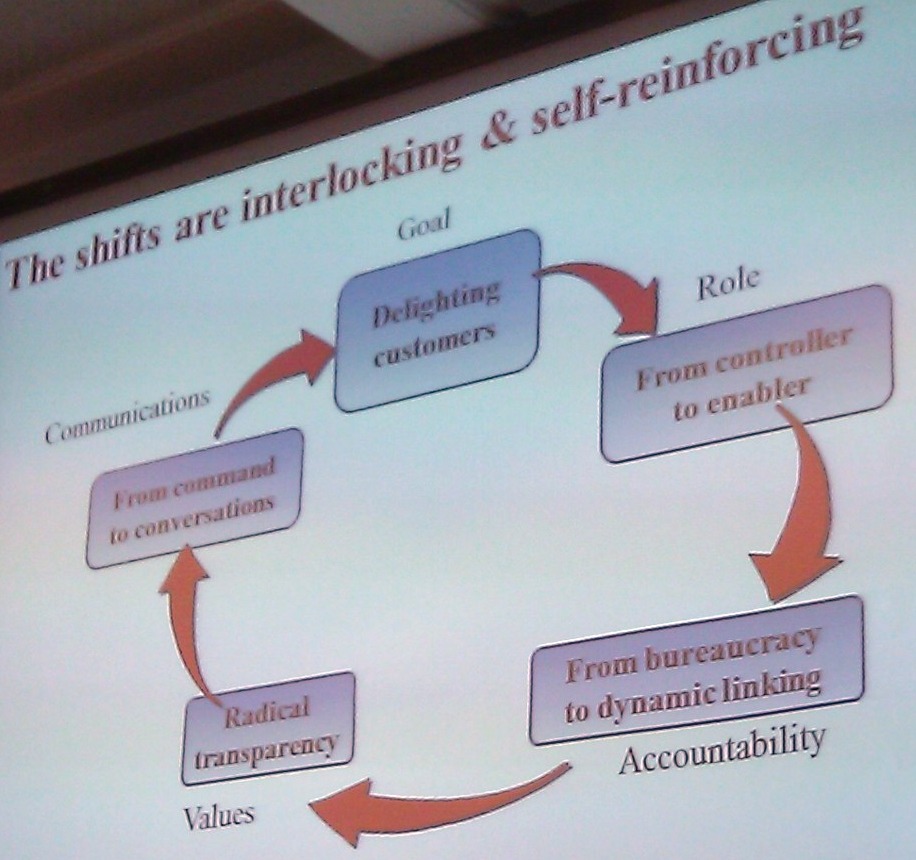 The new goal should be «from outputs to customers».

Provide a continuous stream of additonal customer value and provide it quicker to users. Companies like SalesForce stress items like customer success, customer trust and measure the Net Promoter Score.

The customer is now the boss! Customers today have abundance of information, talk to other customers, buy in different places at lower loyalty. Customers don’t buy anymore what you produce. Companies have to understand customer needs and help solve their problems.

Costs come down of their own accord when customers are in the focus of corporate activities. Unnecessary administrative tasks are not performed at all anymore. It’s about getting rid of queues. Zappos is a leader in online shopping experience. They happen to deliver over night at free cost while ‹only› promising a two day delivery which would be impressive already… Customer word of mouth is one of the consequences and with it, eventually, comes financial success. Zappos› shipping and call center costs are way above industry standards but that’s what caused the success in the first place!

Less is more, as Apple’s devices show. DVD player controls may have up to 54 buttons, whereas iPods have just 4.

Making money is the result of a firms’s action, not the goal. Delighting the customer means a different way of running the organization.

2. Managers become enablers of self-organized teams instead of controllers

Scrum, Lean, Kanban or any similar methodology are good tools that help with agile project delivery.

Progress is measured by direct client feedback. But according to Eric Ries: Most changes make things worse for the customers (especially if the buy button is not visible because it is too big…).

Define work goals in the form of user stories. If you run a boutique hotel your guests› concept should always have in mind: ‹As a hotel guest, I want a unique room that I have home away from home›.
‹Succeeding with Agile› is a book on writing a book in an agile manner by presenting each chapter to the audience and building feedback into the next chapters.

4. From value to values

Radical transparency is one of the principles of Alan Mullaly, CEO of Ford. A colour system with green, orange and red used to visualize company key figures. When Mullaly started out everything had the status green despite Ford had lost $14 Billion in the previous year. A call for transparency later caused one figure to became orange. This triggered a constructive conversation and instead of being the focus of a problem everybody joined in and helped fixing the problem. From there on many more orange figures popped up because managers wanted to get help in fixing their challenges.
Mullaly, against conventional management wisdom, when taking the helm didn’t replace the top management but instead explained them the new management principles and asked everybody to help prosper along those new guidelines.

5. From top-down to conversation

Agile in general has downplayed ‹touchy feely› stuff such as delighting customers and top-down communication. Once you introduce agility, it affects the whole organization. The whole organization should run on the same agile principles or it will end up in war with itself. Done at enterprise level agile change can leverage nicely and lead to extreme gains.

The transition to Agile won’t be easy: «The Machine that Changed the World» is a book about Japanese order manufacturing.

The mentioned survey found that the world’s best run plant was Ford’s Hermosillo plant in Mexico! But this plant was not run in the Ford way, therefore it was closed… Only in 2006 the new CEO, Allan Mullaly, changed this management approach and changed the whole organization toward Agile.

Marcel Proust: The real voyage of discovery consists not in seeking new landscapes, but in having new eyes.
https://twitter.com/#!/WalterSchaerer/status/113699768139649024

Steve’s findings on the reason outsourcing potentially kills our future or why Amazon couldn’t make a Kindle in the U.S. even if they wanted to, is worth reading over at the Forbes blog.