Navigation:Webmemo»Tools»Wordpress»Matt Mullenweg on the Future of WordPress – Interview by Robert Scoble

WordPress has changed the world of publishing in the past. The publishing industry is under pressure from Facebook and Twitter on one side and from Tumblr and Posterous on another. There is much disruption going on. How will WordPress fit into this development?

Robert: So Matt, what have you planned for the future?

Matt Mullenberg is not talking about WordPress 3.0 since he presented the new features at the ‚state of the word‚ talk at the WordCamp in San Francisco.

Matt got into the blogging market only fairly late in 2003 and everybody told him that the market was too saturated… Yet blogging has been there ever since. Facebook or YouTube didn’t exist at the time. The internet has changed dramatically since then, but many people still want to master their own domain. Matt wants to provide them with a very powerful open source blogging and CMS system so they can be in charge.

No, not at all. Matt prefers open systems and wants to empower people to do their own thing. He still sees many WordPress features that he wants to improve in future releases. Joel Spolsky said that it takes ten years to write good software (get used to it…). Matt thinks they are seven years into this process.

How does your company Automattic work, how is it built?

What’s your focus between WordPress.com and WordPress.org? Are you moving more into a hosted version?

No, they are much like Ying and Yang: WordPress.com runs the same software that you can download. The high volume on WordPress.com helps to identify database bottlenecks that help improving the whole system. Innovative use of WordPress.org helps developing the common software base.
People don’t tolerate too many releases, therefore WordPress.com releases only three times a year. Whereas with WordPress.org tests are much more frequent and may regard only part of the code.

Where do you see WordPress going in the future?

Matt doesn’t think even two years out. The internet changes just too quickly. So Matt focuses first on the community. There are 1400 bug trackers active today that help improving the platform. Treating the developers well is a main priority.
Beyond that WordPress.org ist very important. That was the starting point and it’s where the most innovative use is implemented. There are more than 10’000 plugins available today, they provide good new marketing input for free.

What have you learned from the plugin usage model compared to WordPress itself?

How are mobile devices changing your world? How will they change publishing?

Matt loves his iPad really much. Albeit its weight. Amazon’s Kindle is still better for reading.

Mobile apps are very intuitive to use, the adoption is huge. It allows to experiment with new forms of interfaces. There are no legacy users, new interfaces can be tested freely like in a sandbox.

How about the toolbars we now see with the social bookmarking buttons? What do you think about those?

Automattic walks a thin line between doing what people want and bewaring them from spoiling their own blogs. For example the most popular theme on WordPress.com by far is ‚Chaotic Soul‘, a very dark and mystic theme; whereas supposedly ‚good‘ designed themes with white background only get a couple of thousand users. 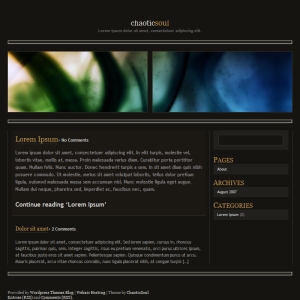 WordPress.com is mainly advertising free. There is no opinion yet on the Facebook Like button. Often Matt waits with new features until the fad passes and takes it from there. For example people don’t ask for Digg buttons that much anymore.

Why don’t you allow advertising on WordPress.com? You have high costs for bandwidth and people maintaining your service.

Matt is disappointed with the Google AdSense performance. Automattic’s revenue from it is flat to down despite a tripling of traffic. Matt thinks that the blog’s revenue should not be a blogger’s first motivation or the content quality will suffer.

What startups excite you as an angel investor?

Matt started in 2008 to support friends that had interesting projects. He just recently had a first exit with Group Card that was sold to InComm. In general Matt looks for open source components. But his first priority is Automattic and his WordPress foundation.

How about the location services such as FourSquare? Is location going to be built into WordPress in the future?

Yes! WordPress 1.5 had geo location built into it already but it was taken out because they thought no one would ever use it… and at the time there was no Google Maps and no mashups and no smartphones, so no one used it indeed. Geo location is supported today via API. The most interesting applications will be around the social graph and geo location in order to provide more filtering options than today via your friend’s opinions and your current location.

How about security? Is it a webhost’s problem?

Security is a serious problem. But if you run the latest WordPress version and you’re hacked, then there must be a problem with your host. Therefore Automattic makes sure the updating process is very easy via one single click of a button. But Automattic also needs the hosts‘ support for them to make their environment secure.
BlueHost e.g. has developed a kernel_mod that watches for unusual file changes. Robert Scoble’s employer Rackspace works hard on improving WordPress security and they enjoy the cooperation on this with Automattic.

Matt loves coming to these presentations and meeting WordPress users all over the world because it’s so easy to get lost in the big numbers: Automattic powers 20 mio. websites accounting for some 8.5% or so of the web. But that is meaningless when Matt talks to individual users and how they implement WordPress for their business, non-profits small or big such as Global Voices.

That’s what drives Matt and the WordPress community.